Bodhgaya - the place of enlightenment - Letter 4


Temples and conflicts and fog


We woke c. 4- 5 hours later, got up, showered in cold water – no hot and went off to visit our first site. I'd said when booking this particular tour guide – who was an Indian member of the western buddhist group to which I belong, that what I wanted on the trip was meditation every morning and a spiritual journey around the sites.... that never happened.


Our guide was pleasant enough and full of boyish charm and at each site visited regurgitated some of the old apocryphal myths about the Buddha's life story, but had very little real archaelogical or historical knowledge. The worst thing on this first day was the developing conflict with Mani – the guy who was supposedly organising the trip. He was based in Nagabodhi, another Indian town and I never actually met him. This dispute was to start us off with bad feeling and difficulties. We had arranged to pay the full fees by cash on arrival. This would have been fine, but I was annoyed firstly that we'd had a ghastly 24 hour journey in third class (OK the delays were no one's fault but third class???), when I had specifically requested Upper Second class tickets. Indeed I later explained what had happened to us, to an English buddhist who was incredulous that a tour organiser would subject two middle-aged female westerners to the awful conditions of 3rd class. I was concerned about what the rest of the trip was going to be like under the circumstances, we were to have several long car journeys and then be put on a train again from Gokhpur back to Delhi at the end of the tour - yes of course, he said, it would be in second class – as if the alternative was unthinkable.... well!!. I felt therefore that if we were to pay all the money over we would not be in any kind of bargaining position for the rest of the trip. I suggested at first that we pay 75% and when that was stonewalled that we withhold £50, but there was no compromise or discussion. Consequently we were late setting off for the sites and the next part of the journey, which had a knock-on effect.


Julia on the other hand just wanted an easy life and for everyone to be happy, so she wanted just to pay all the money without quibble. Mani meanwhile, unknown to us, instructed Anu to pass on to us that unless we paid up in full now, he would cancel all arrangements. Anu was diffident in telling us this, clearly embarassed and it came out in 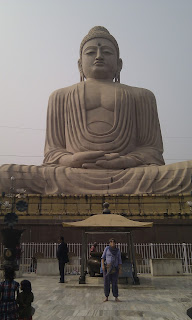 vague dribs and drabs. This freaked Julia out, but not so much me as I had originally contacted another tour company who might be willing to step in. The problem was that at this stage we were really not in a strong negotiating position, we needed a guide and someone to arrange hotels and organise trips to various sites, our local knowledge was very limited and we were both dog tired.


In the end I capitulated and handed over the money, but felt strongly aggrieved that I was being held to ransom. We also found out later, from a travel tour operator in Sarnath that we could easily have organised the rest of our trip ourselves, with his help, for much cheaper. My forebodings turned out to have some foundation when, after my payment, the trip that then unfolded was considerably substandard - there was no meditation organised by our guide or anything approaching spiritual experience, for a trip that I went on as a Buddhist pilgrimage. The only religious experiences we had at various sites was due to meditation or chanting organised by me. The hotels/guest houses that we were put in by our very sweet but grossly inexperienced guide were of generally low quality – sometimes sheets not clean, not enough blankets and in several places a room so dirty that we'd use half a packet of wet-wipes to clean them before we could sleep in them. V few had hot water. We were not expecting 5* hotels, but maybe 2* or at least a good level of cleanliness. This is not what we got. Anyway back to the story.
We had lunch in a rather hot an oppressive cafe – a long walk from our accomdation, it seemed to be full of backpackers, a few aging hippies and a woman in a white kaftan came over asking for donations to her charity., I had a pleasant veg curry with boiled rice and chapati, Julia had little as her stomach was upset. Afterwards, walking about we began to see what Bodh Gaya was like - there was a cacophany of noise and traffic and commercial activity, street stalls selling buddhist souvenirs, from pictures of the Dalai Lama, to carvings of the buddha, all colours, shapes and sizes; pashminas, cheap jewellry, trinkets, food snacks cooked on the spot. The general atmosphere of the whole place was of a giant commercial opportunity. When you tried to cross the road you had to jump out of the way to avoid being run over by hundred of bicycles, tuk-tuks, beat up old cars and lorries – all blowing their horns, cows wandering about through it all.and hawkers trying to get you to stop at their stall.The dust was everywhere


I thought of where I was and why I had come there – this was the place of the Buddha's enlightenment, a place that should have been sacred and inspiring, a place for quiet contemplation and meditation. I thought with some sympathy of the biblical story of Jesus getting angry with the stalls and money lenders in the Temple precincts, overturning their tables. We asked Anu to take us to the Buddhist centre hoping to find some peace there, Anu called a tuk-tuk and we left the main road and down a rough gravel track to some tall wire gates where the driver dropped us. We walked through and down the track and were asked to sit down at an old table and chairs overlooking the large garden, and eventually tea was brought. The local Indian chair of that centre was a pleasant chap and chatted to us for a while telling us of their local charitable intitatives going into schools, raising awareness about Buddhism in the poorest sections of the community.


Pictures of Dr Ambedkar were prominent – he was the low caste Dalit who in the 50s, against all odds became a politician and a member of the Indian cabinet. Feeling that there was no other way to break the caste system and improve the lot of these Dalits he had urged his followers to leave Hinduism behind and become buddhists. He instigated mass conversions, instructed and encouraged by Sangharakshita the English founder of the Triratna Buddhist Order to which I belong. Ambedkar had died shortly after and Sangharakshita had inherited his leadership of these mutitudes of uninstructed buddhists. Since then programmes have been put in place, schools founded, support given to many enterprises to give assistance to these now second and third generation buddhists, often still given scant respect by those Hindus who adhere still to the caste system,


We were enjoying the peace and tranquillity in the garden, a welcome break from the madness outside on the main road. I asked if we could see the shrine room and whether they had any meditation planned. The three members there led us down and it was suggested I lead a meditation, which I did using my meditation app on my phone which rings a bell every five minutes for however long you sit for. I led the metta bhavana, which is about developing friendly positive feelings towards yourself and others. There's a bit where you bring forward your positive feelings to someone you have had conflict with – I put M, our agent there but with limited success.


We left after a guided tour of the buildings and proposed developments, facilites seemed very basic compared to the smart well funded retreat centres in England.


Anu and his tall smiley mate took us off on a walk to see the giant Buddha statue in the distance – 80 foot tall, built by the Tibetans – I'll post up photos soon. Then we took a tuk tuk back to the guest house. 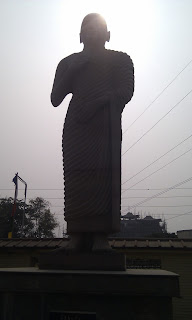 Lindsay said...
This comment has been removed by a blog administrator.
2:44 pm