You are invited to
a memoir book launch on

A HIPPOPOTAMUS AT THE TABLE
by Anna Meryt 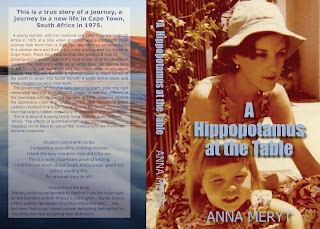 A true story of a journey to a new life
in Cape Town, South Africa in 1975

There’ll be music – blues guitar
by the fabulous Greg Mayston and
wine and readings from the book.

Extracts from the book:

Hatshepsut the Queen who became Pharoah in the 18th Dynasty

I had occasion to think about her - and resurrect some of her writing(from inscriptions) when an Egyptology student turned up from Bonne University. I thought I'd share it with you because I always find the words on this inscription so moving, like she's talking to me here and now.

As you may or may not know, Hatshepsut became Regent of Egypt (18th Dynasty)c. 1478 BC, when her sickly husband Thutmosis II died and his son by a lesser wife (Thutmosis III) was only 7. She was also the daughter of Thutmosis I - so a king's daughter and a king's wife. There was no ritual or insignia for a female to rule so, after a short while she took for herself full male titles and had herself represented as a male in statues everywhere i.e. with the ritual beard, Nemset (Folded cloth) headdress and crook and flail(symbols of the right to rule) crossed across her chest. There is an example in the British Museum. She did not hand over to Thutmosis III when he reached 18 but continued to rule for altogether C.22 years, which it used to be thought must have pissed her nephew off no end, coz after her death (ie disappearance from the record) although towards the end of his reign) her name was removed from many monuments. It is now thought that as she'd put him in charge of the army which he continued to lead throughout her reign, this would not have happened had he held a grudge against her.

Here's an extract from her texts, where she says 'King' she means herself:

I have done this (i.e. commissioned and created the obelisk)
with a loving heart for my father Amun (Amun-Re, King of the Gods) ...
I did not forget whatever he had ordained. My majesty knows his divinity, I acted under his command;
it was he who led me, I did not plan a work without his doing ...
I did not stray from what he commanded.
I entered into the plans of his heart ...

It is the King himself who says:
I declare before the folk who shall be in the future,
who shall observe the monument I made for my father,
who shall speak in discussion,
who shall look to posterity -
it was when I sat in the palace
and thought of my maker
that my heart led me to make for him
two obelisks of electrum,
whose summits would reach the heavens
in the august hall of columns,
between the two great portals of the King,
the Strong Bull, King Aakheperkare, the Horus triumphant. (ie herself Hatshepsut taking on the male titulary)
Now my heart turns to and fro
in thinking what will the people say,
they who shall see my monument in after years,
and shall speak of what I have done ...


There's more ... this text goes on for another page or so. It always makes the hairs stand up on the back of my neck when she says 'I declare before the folk who shall be in the future and 'what will the people say, they who shall see my monument in after years.' This woman was the mighty ruler of Egypt and the whole of the lands reaching up into what is now Palestine, Israel, Syria, Egypt, Iraq, Iran were subject to or under the powerful influence of her as ruler. There were no great battles in her reign as such - she did not apparently go on any great conquering quests (like all the other male kings did). And let's not forget Senenmut, the architect of her fabulous temple in the Valley of the Kings in Luxor, often depicted by her side or with her daughter on his lap. Was he her lover? And then he disappears after some years - did he fall from grace? Die? She's a fascinating woman with a hugely intriguing story.