There are times
when TV, internet, alcohol
are the only medication for the mind


At those times
I can cry a deluge
for Princess Diana, Whitney, Mandela


At those times
I link to collective grief,
break down the party wall


After those times
I blow my nose
and carry on.

We are performing on Sunday Sept 15th at Golders Hill Park
Posted by Anna Meryt - About Me No comments:

Thinking of what's going on in Zimbabwe right now  so decided to put up again.  Supposed to be elections announced by end of July, people everywhere are QUEUING up to register to vote all you people who don't bother to  vote.  Members of the police told to photocopy their voting slip and hand to their commanding officer ... to show who they voted for ....

Bulawayo is south of Zimbabwe and is where the Gukhurahundi took place in the 80s, under Mugabe when 30,000+ Ndebeles (Mugabe is Shona) were massacred by foreign mercenaries hired by Mugabe.


In the playground
we compare notes
to place ourselves.
Where you born then?
Watford. Harrow. London
English places.


I wait. Holding back.
Then I say it, rolling the vowel sounds
slowly on my tongue,
casual like.


What? Where’s that?
Low key, shrug.
Africa.
Africa?
Wow. Then silence.
Staring at me.
No one can top that.


I walk off slowly, nonchalant like.
I don’t know what Bul-a-way-o is.
I know it’s in Africa.
They tell me nothing about it.
Too busy with the present,
to bother about that past time in Africa.

In the album, a black and white picture
of small me on some steps in a garden
and an ‘arm-a-dillo’, strange creature,
in Bul-a-way-o.


I like the name
Bul-a-way-o,
where I was born.
No one can top that.

Is it finished yet?

I keep thinking this is the end,
the last time, no more, it's finished -
I'm angry when I think that,
I tell myself, I can't go on.


I'll make plans,
my rational brain takes charge.
How will I organise my time
now I am one, not two?


Mornings uncluttered,
days busy with projects,
evenings, my own ...


What about the daily chit chat
and lack of to and fro?
No more intimate moments,
and laughing together?


And so my mind see saws
up and down, like two old men
in an endless argument, never agreeing. 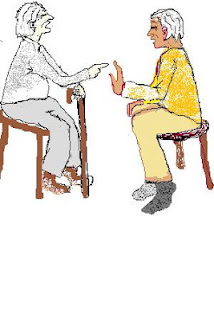