Anna Meryt Writings: A Spooky Story Poem for Halloween - The Spriggan: Dusk is falling on the Parkland walk the last remnants of walkers quicken their step they’ve heard the rumours, and the rumours are r...
Posted by Anna Meryt - About Me No comments:

A Spooky Story Poem for Halloween - The Spriggan 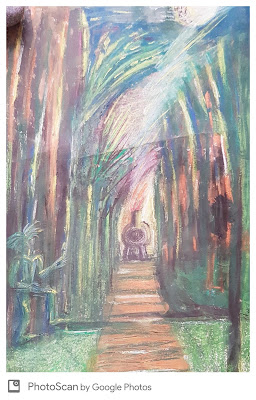 
The goat man’s eyelids open a tiny crack.
The woman pushing her pram hurries past. A low growl
starts deep in the throat of the black dog tied to her pram …


the dog knows, oh yes he knows…
he keeps his head low, stiff-legged as they scurry past,
down the steps and out onto the lane.


The last train chuffed its way down this track in 1954.
Nature took over and time stood still. Until in 1984,
the Parkland Walk was born.  Banks of weeds and brambles
were cleared, now Nature was to be conserved but controlled.


High up, where the walk crosses a wide bridge
near Muswell Hill, the lights of London are flickering on,
in a sea of twinkles across to the Thames and beyond.


It’s a clear cold crispy night and a full moon is rising.
The Spriggan lifts his grey green head, stretches out
cold stiff limbs and looks to the rising moon.  He cocks his head,

listening …‘Can you hear it? Can you hear it? His croaking voice,
rusty as old iron, speaks in a hoarse whisper, to himself.
Chuff, chuff.  Puff, puff.  Whooo.. hooo, whooo…hooo.
the sound of a steam engine on missing tracks, missing since


all were lifted and sold for scrap in 1984.  The train is heading back
in time, back to a different time, a time when iron gods were king.
In the dead of night, time is suspended, time is malleable, an echo of the past.


The goat man raises his eight-foot metal bulk, green with Verdigris
and rust. He begins his nightly patrol along the shadowed walk,
along the nature trails and ghostly paths of Alexandra Palace.

If any human were to tread this dark and misty wooded way,
in the deepest night, would they encounter this same
giant cloven-hooved apparition?


I think not. Mystic magic fades from view and
hides easily from human sight.
Stephen King’s Parkland Walk story, speaks of people known
to lose their way here, and some who lose their way … forever.


By day, the walk is green and soft and full of light and air.
It is a haven now for many species of birds and butterflies.
City-worn humans come to run and walk and breathe
some cleaner air into their lungs.


By night, foxes bark and breed, slow-worms, those snake-like lizards,
curl in dark hollows to preserve any heat gathered from the day,
and in the coldest part of winter, hibernate with the hedgehogs.


The Spriggan marches on, passing overgrown platforms near Crouch End
and Muswell Hill. He melts back into the urban, permaculture forest
of trees and shrubs, as racing toward him, on the absent tracks,
he hears a whistle and hiss and rattle that warns him to stand aside.


Out of the dark and ghostly gloom, a monster of iron and steel
shimmers into view, whoo, whoo-ing a soft and spooky whistle.
And lit by a shaft of moonlight, a whisper of grey steam floats
up from the chimney, rising to float across the moon.


As the train swishes past, look, look, whose faces are gazing
from carriage windows whisking past? Can that be Karl Marx’s
towering form, seated in the driver’s cabin,
risen from his Highgate grave to join the proletariat at last? 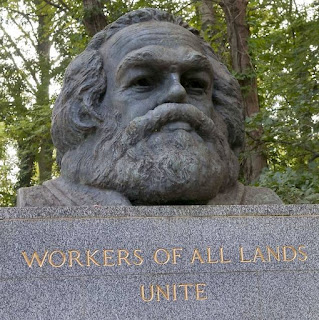 Behind him see the story-tellers – Chaucer, Pepys and Congreve…
Browning, Trollope, Dickens, Austen and Mary Ann Evans,
to give George Elliot her rightful name.

And oh the poets – Christina Rossetti and Coleridge,
again from Highgate graves, seated beside William Blake from Bunhill Row,
risen up with the other ‘non-conformists’, Bunyan and Defoe.

Crowded too among these literary giants are misty murderers,
some hanged who got their just desserts, like serial killer Christie,
others maybe not, like Ruth Ellis, the last to be hanged, at Holloway.
Death is a great leveller is it not?


And Jack – who is that shadowy figure behind them all, if not he?
All are crowding at the windows to see the London of their pasts
slipping by, the London they have lost.


The lights flicker across our Spriggan man’s impassive face,
as each populated carriage slides by, until the final coach
appears, bolting towards him as a ghostly laugh echoes
down the walkways.


Seated on top of this final wagon, cross-legged, blazing trident
held above his head, his bronze-red skin glows and mad eyes burn
like hot coals. He laughs a dangerous fearless laugh, as the train
mutters along the track, fading back into the haunted demon world.


The Green Faerie man turns back upon the now silent walkway
and with a last glance behind, continues his hooven trot, returning
to his sheltered brick arch beside the short tunnel.

He is Spriggan, the Keeper and the Watcher,
guardian of abandoned ruins, some say a stealer of children,
who leaves a Spriggan substitute behind, but I say, not this Green Man,
this one has a benevolent eye.


Silence and darkness lie upon the Parkland Walk again and
as a faint pink light starts to tinge the distant horizon,
his eyelids droop as he freezes into his usual pose. 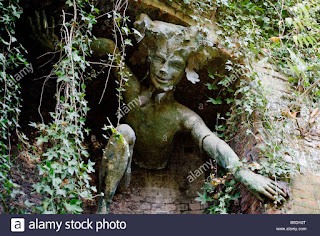