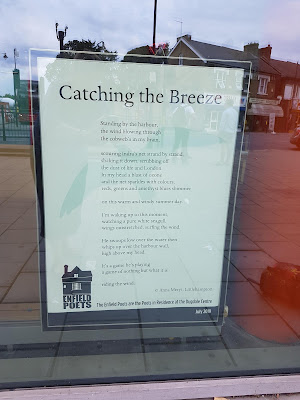 Last week I had an email from Anthony Fisher, the facilitator/organiser of Enfield Poets letting me know that my poem Catching the Breeze had been blown up and put in the window of The Dugdale Arts Centre, in Enfield and would be displayed as Poem of the Month until the end of July.  I was surprised, delighted, thrilled and of course honoured that my poem was chosen.

Years ago, I really believed that my poetry would never be recognised as having any literary merit and that no one, except a few friends and close family would read my poems.  I've never been interested in writing clever and obscure poetry (although I do enjoy reading other people's) . I've never written the kind of poetry that ordinary people would find hard to grasp. I've taught in prisons and to those going through the Criminal Justice system, to those for whom poetry has been outside their experience.  I've also taught in Higher and Adult Education. Many people I've taught thought poetry was for other people at a different educational level, never for them.   Even educated people I've come across, some seemed to think poetry was for the literati, the academics, an elite who read literary journals not for them.

From the start I was not interested in writing that sort of perceived clever, obscure poetry.  I wanted my poems to reach ordinary people's everyday experience.  I never cared if some high faluting lit-mag turned down my poetry.

Over the last 20 years I've had many poems published in anthologies and poetry magazines.  Each time I've been surprised that a poem of mine was accepted.

My first collection was called 'Heart Broke'  and was published in 2013 by Tambourine Press. 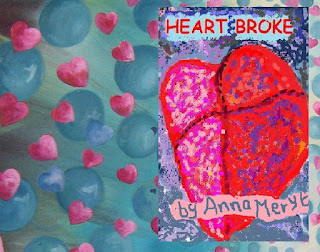 In the Forward I have quoted Jimmy Ruffin - 'What becomes of the broken hearted who had love that's now departed...'  In the Forward I wrote:
'All the poems were about the end of whichever relationship I was in at the time. It was always painful and … it always seemed questionable how I would survive...'  There was a great review in Gold Dust - a literary magazine:
Gold Dust Magazine review of Heart Broke by Anna Meryt. 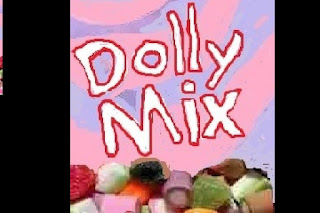 contained many poems I had written and used  for performance.    In my Intro to the collection, I talk about my poetry writing ethos:

'Many poets write books for the poetry world, not for the ordinary reader – not for the average Joanna or Jo who thinks they don’t know what poetry is about.  I showed a poem I wrote many years ago to a well-read friend and said what do you think?  He said ‘I couldn’t possibly comment as I don’t know enough about poetry’.  He was under the common assumption that good poetry is only for experts and they are the ones who should comment on it, that it is a literary endeavour that only very highbrow people can truly understand.  He was therefore afraid to say something for fear of what?  Not giving me the correct literary or academic response?
I write poems about ordinary life, about the high street, about popping down the shops, buying new shoes, the difficulties buying a bra or does God like football. About life, death and anything in between that pops up.  I write for you and me – not obscure literary poems (which have their place), but poems that are easy to understand and I hope will resonate with a wide audience.  You don’t have to be a literary critic to appreciate my poems – you can just say – Oh yes I like that one, or Oh I felt like that when ... or Oh I’m not alone then, it happened to someone else.. or even Oh no! I don’t like that one... whatever your response, it’s all fine by me.' 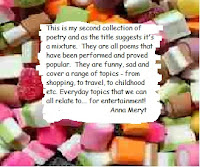 Coming back to my poem in the window of the Dugdale Centre then, well I guess I feel like cheering, because that poem and the decision to put it up for the passing public to read in the centre of Enfield was chosen as Poem of he Month by fellow poets. But it's also on display for any passing person to stop for a moment and read.  Ordinary people on their way to the shops. 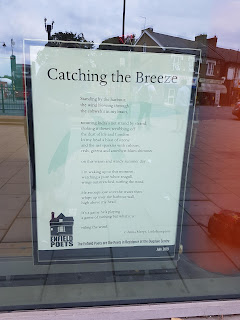 That's what makes me want to cheer.