Sarnath is the deer park where Gautama Buddha first taught the Dharma, and where the Buddhist Sangha came into existence. . . . Sarnath is located 13 kilometres north-east of Varanasi, in Uttar Pradesh, India.


The Buddha went from Bodhgaya to Sarnath about 5 weeks after his enlightenment. Before Gautama (the Buddha-to-be) attained enlightenment, he gave up his austere penances and his friends, the Pañcavaggiya monks, left him and went to Isipatana.
After attaining Enlightenment the Buddha, leaving Uruvela travelled to Isipatana to join and teach them. ...When Gautama Buddha found his five former companions, he taught them, they understood and as a result they also became enlightened. At that time the community of the enlightened ones, ie the Sangha, was founded. The sermon Buddha gave to the five monks was his first sermon, called the Dhammacakkappavattana Sutta.

The journey to Sarnath, from Bodhgaya we were told would take c.4-5 hours. In the event it took about 7 hours. The road and weather conditions were appalling, that's why. Every town or village we passed through in our saloon car had traffic problems, often gridlocked. This sometimes meant that our driver would detour through some roundabout rural area in order to avoid a town or village centre likely to be jammed up. Added to that a dense fog (similar to the one we had encountered in Delhi), descended that night on a large part of Northern India until at its worst (on the lower slopes) visibility was down to c. 2 metres.


We started off late, c. 2 pm, due to the Manidharma dispute about payment. I sat in the front, as I prefer to avoid feeling nauseous as often happens if I'm in the back of a car. But after a couple of hours my back got painful due to sitting upright when all I wanted was to sleep. I find this hard (in planes too) if I can't lie flat. I didn't say much but was probably squirming about, unable to get comfortable. Julia kindly offered to swop places, so at the next loo stop we swopped around. Loo stops were usually at petrol forecourts. There was a rather modern looking cafe attached so we managed to get some chai and I got a veg curry. Julia ate lightly as she was finding the journey tough and it affected her appetite, the boys had a stir fry, all with chapttis. The toilet was the usual tiny cubicle with a stainless steel squat toilet, I had my own packets of tisses with me which was just as well as toilet paper s rarely in evidence in India (or Indonesia) You use your left hand and then sluice off with the hose and tap provided! Although I do like to fit in with local custom that is one I never get used to. We used tissues, washed and then anti-bacterial gel every time,. Squat toilets are quite difficult for me as I have knee problems. Don't even go there.


Anyway, with full bellies we got back in the car and drove off on the next leg. Julia later talked about this trip as for her a bit of a nightmare – 7 hours in an uncomfortable saloon with atrocious driving conditions. I was now lying out on the back seat, I had no wish to be in the front seat (a) because of my back and (b) because the driving conditions were pretty scarey. I went to sleep for most of it. Julia stayed awake looking out. I told her a few times not to look, but she found that quite difficult and also could not sleep.


The driving conditions were like this – fog, descending, darkness, poor visibility and heavy traffic. Our driver had his hand on the horn a great deal and was constantly swerving around pedestrians, dogs, chickens, cows, lorries, motorbikes with small children on the back etc.. etc. Sometimes the road was long and straight, other times it meandered up steep hillsides and zigzagged down the other side. When the fog and darkness descended and visibility on some stretches (usually the bottom of long slopes) was reduced to c. 2 metres, traffic on the narrow potholed two-lane (forward and back) road was not only a hazard in the direction you're travelling in, but coming towards you, looming out of the darkness and fog were lorries, cars, old vans, horse and carts, and not all of them had any lights. So being a passenger looking out from a front seat was often hair-raising to say the least. I'm kind of philosophcal about these things, having travelled quite a bit and feel that if my number's up.... And I'm a good sleeper. It was not so easy for Julia.


So she was still talking about that 'dreadful' car journey a week later, whereas for me, I'd forgotten about it and moved on to the next challenge. I seem to have a good ability to focus on the here and now and forget anything unpleasant really quickly...


We got there eventually of course and were taken to Shivam Guest house – the room was basic and when we looked in, there was one double bed – obviously we refused to even enter the room until they had separated the double into twin beds, which was done swiftly. But it was reasonably clean, with hot water in the shower – I asked for an extra mattress as the one provided (rock hard) was about 1.5 inches thick . We also asked for an extra sheet – as there was only one although with a thick warm fleecey blanket. The room was on the ground floor along the corridor past rthe reception desk. The manager welcomed us in a friendly manner and Julia, a bit later when theyd sorted the beds out, managed to boil us a kettle for our hot-water bottles, by reception where there was a spare plug. It was freezing by then c. 4C and of course nowhere in India seems to have central heating or any form of heating really. The thing is, it would warm up by midday to about 18C and you'd be stripping off the layers down to a T shirt for a few hours, then by 4 o'clock they were all going back on.


Anyway, we fell into bed, Julia with her earplugs and sleeping tablet – she's not good at room sharing, being a light sleeper – she said I snored and that she could hear me breathing all night! Cheek! What can I say? Anyway on this occasion she slept reasonably OK and even said next day that she was getting used to sharing a room.


Anu was a little late next morning – he was supposed to meet us in the lobby at 8 a.m, but turned up at c. 8:30. We went for breakfast to a rather bleak place up some steep stairs nearbye, right on the small central town roundabout, in a large room where we were the only guests. I  had a mushroom omelette,  Julia pushed hers around her plate, still not feeling up to eating.

Then we went to visit some sites - we walked down a long wide straight road, past a few pavement cafes on the left.  The gates to the sites were on the right and large parties of tourists  were entering the gates - many Japanese, American, Tibetan, German groups.  Tibetan monks were present at many sites with their mustard and dark red robes and shaved heads, they were distinctive and brought colour to the sites.  There were quite a few groups of beggars at the various gates, most were children, others were women carrying babies.  The babies had clearly been trained also to put out their hands and look pleading.  I tried to carry coins and small notes to give these beggars, but of course as soon as you gave to one another 10 would appear.  I found that (as the last time in India) they would look at the 10 rupee note you gave them with disdain.  Many tourists out of guilt, give them 100 or higher rupee notes, which is, although about £1.20 in UK money, a great deal of course, more than most people earn in a day (average monthly wage is 3000 rupees c.18.75 rupees per hour)

The Chaukhandi Stupa which commemorates the spot where the Buddha met his first disciples, dating back to the fifth century or earlier and later enhanced by the addition of an octagonal tower of Islamic origin. It is undergoing restoration.

The ruins of the Mulagandhakuti vihara mark the place where the Buddha spent his first rainy season. The modern Mulagandhakuti Vihara is a monastery built in the 1930s by the Sri Lankan Mahabodhi Society, with beautiful wall paintings. Behind it is the Deer Park (where deer are still to be seen).

We were exhausted by now so asked Anu to take us for lunch - we sat outdoors (as by now it was warm enough) in a small restaurant opposite the museum - which Anu said we'd visit after lunch. Over our curry and rice lunch Anu told us that tonight we were going on a boat trip on the Ganges to the cremation grounds and that he'd found a driver with an SUV and it wasn't too far. First we'd go to the museum which we could see from where we were sitting. I suggested that Julia and I go back to our room for a siesta afterwards. We'd need to put on some layers as it would be cold on the river. The temperature was already falling. 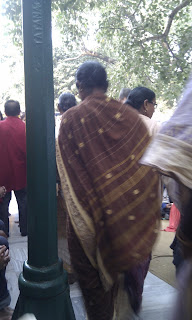 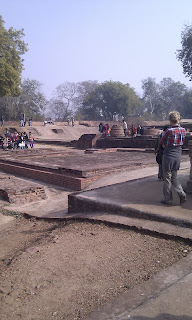 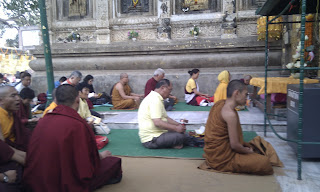 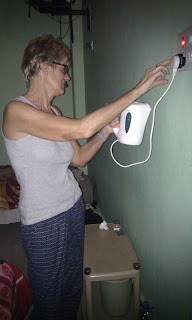 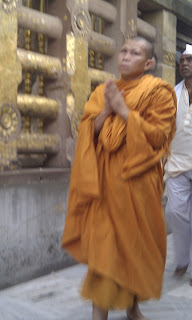 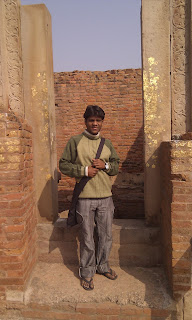 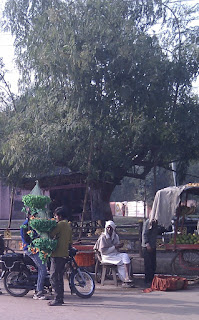 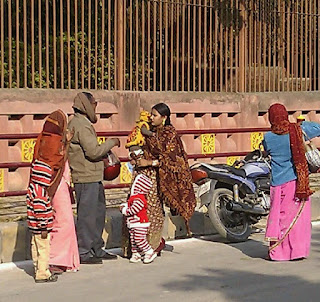 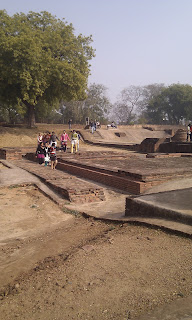