Actually I'm writing this from Delhi airport, is it a week later already... god can't be. Just about to board our Jet Airways flight to Singapore.


On a Boeing 737 now. Where to begin – at the train station a week ago – its 6:30 a.m. We hear on the tannoy in Hindi first then English – a sort of Heathrow posh woman's voice, that the train is delayed by 4 hours. They don't say why. The platform is crowded with people. There is no where to sit, we have two heavy bags with us and two more portable smaller rucksacs. We sit on a small metal girder attached to something, there is water gurgling out behind us, pouring across the platform and on to the rails. No one notices but us. The crowds of Indians mill about, most dressed in rougher garb, grey blankets wrapped around – it's quite cool temperatures c. 8-10 C, head cloths wrapped round their heads and under the chin, manual workers, a few women in bright coloured saris. We appear to be the only Europeans – we too are wrapped up well against the cold in khaki trousers and layers on top, vests, T-shirts, jumpers, fleece gilets.


I get out the ticket again – we need a train with a certain number printed on the side, then we must get on at carriage 1A. We feel despondent, what are we going to do for 4 hours... we'd got up at 5 a.m and the taxi had dropped us at 6 a.m. A porter had grabbed our bags and we'd run after him up metal steps, down corridors, down steps and we'd arrived at Platform 3 where he'd deposited us, taken several hundred rupees (£2-3) a lot by most standards here and then disappeared off. Our bags were too heavy to carry up the steps and back, so we sat, there was nothing else to do, watching the mayhem around us.


At 8:30 a train pulled in to our platform and the number on the side is the number on our ticket, we check with someone, yes its the train to Bodh Gaya, our train has arrived. I had asked our Triratna buddhist tour agent to book us on Upper second class, which is usually cheapish but OK. But on the ticket it seems to say 3rd... this cant be right? We get in a sleeper carriage which has 6 bunks, check out the nearest toilets – holes in the floor type with metal foot rests at the side, inside the cubicle everything is grey with grime, there's a dirty tap handle for sluicing the hole..... Julia my hygiene fanatic friend has hysteriics then a panic attack.. The carriage is very dirty. I get out our anti-bacterial wet wipes (we had brought loads) and we clean every surface in the carriage.We're going to be here for 14 hours after all. Each wipe becomes quickly black, from the small table in the middle, to the bunks on either side. Two young men have got on, and they watch incredulously as we clean, they chat to each other in Hindi and laugh surrepticiously at these mad Westerners. They climb on their bunks opposite us and roll up in the grubby sheet we have each got by now and doze quickly off.

We sit on the bottom bunks which are empty ( our booking seems to be for a top and middle bunk) and make ourselves relatively comfortable facing the windows and dozing for a few hours. A chai wallah comes down the corridor calling 'chai, chai' every now and again. I get some in my metal cup every couple of hours, hot sickly sweet, milky tea, costing a few pence. Julia sticks to the water bottles from the hotel. Using the loo is a trial for both of us though – I have to hold on to the grimy tap to lower myself into position,I have bad knees. Then hand washing in the grimy sink, then anti-bacterial gel – we do not want any stomach bugs and mostly manage to keep them at bay due to strict hygiene prrecautions throughout our journey. We are beginning to cope and think ok we can manage when we stop at about the fourth station along. Outside our window (which by now I have cleaned – on both sides – so we can see out, there is an older woman with a large trolley covered in bags. I look at her with mild curiosity, pitying the poor buggers in whose carriage she will deposit herself. A few minutes later our curtains are swept back and there she is – we are the poor buggers. Our carriage arrangements are completey swept aside by the man who is with her, portly, bearded, grey hair, she is large and saried. Our cases are pulled out from under the bottom bunks her mountain of goods must go there, Julia's bag ends up on her bunk. Our world for the rest of the journey becomes the cramped confines of our bunks... food is brought for the inmates of our tiny cells from the grubby kitchens in the next carriage –veg curry and rice,with parathas(Indian bread) c. 60 pence for me in small cartons, v little for Jules who has lost her appetite due to a delicate stomach. In the night I wake to the train having stopped in the middle of nowhere and not moving for hours.

Fog has by now descended on everything, a kind of blanketing dry dusty fog so you can't see far out of the window. This fog is to come and go during our entire time in India. Is it due to weather or pollution, some Indian cities are apparently the most polluted in the world and everywhere we go there are gridlocked traffic jams.


Let's skip now to the end of our tortuous journey. It is now 22 hours since we arrived on that platform, 20 hours since we climbed on the train. We feel like prisoners on cell block H by now, we have learnt to survive in the awful conditions in which we find ourselves. We think we have faced the worst but little do we know what is going to happen next, just as we thought the torture of the journey was near its end. 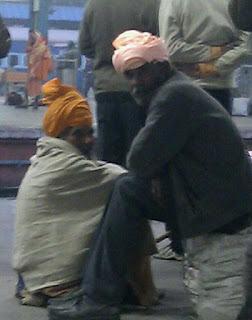 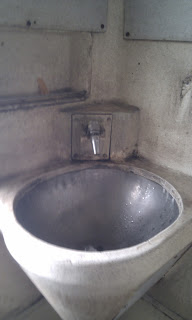 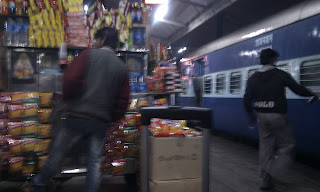 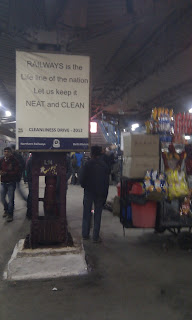 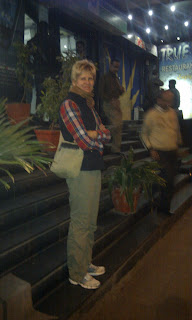 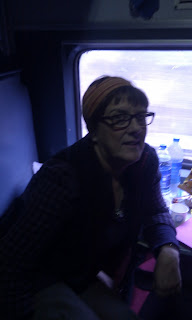 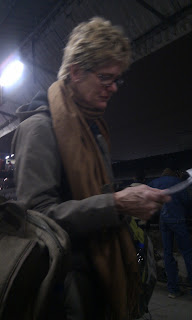