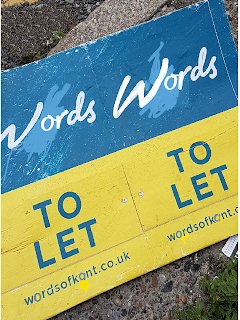 I've been struggling with a poem about the sounds that trees make and they're effect on me this summer. I've realised that there is very few alliterative words that really reflect the sound of a breeze rustling the leaves of trees high above us.  That sound is quite trance inducing - I noticed this recently on a visit to Keats House, Hampstead, 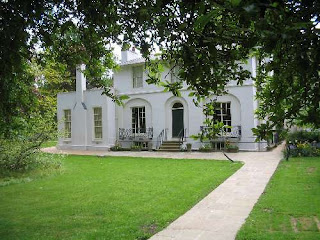 where a group of us sat in the beautiful gardens, beneath the trees on the lawn, on a warm summer's day, listening to a talk about Keats and analysing his lovely poem -

Ode to a Nightingale.

My heart aches, and a drowsy numbness pains My sense, as though of hemlock I had drunk,Or emptied some dull opiate to the drains One minute past, and Lethe-wards had sunk:'Tis not through envy of thy happy lot, But being too happy in thy happiness,--- That thou, light-winged Dryad of the trees, In some melodious plot Of beechen green, and shadows numberless, Singest of summer in full-throated ease.O for a draught of vintage, that hath been Cooled a long age in the deep-delved earth,Tasting of Flora and the country green, Dance, and Provencal song, and sun-burnt mirth!O for a beaker full of the warm South, Full of the true, the blushful Hippocrene, With beaded bubbles winking at the brim, And purple-stained mouth; That I might drink, and leave the world unseen, And with thee fade away into the forest dim:Fade far away, dissolve, and quite forget What thou among the leaves hast never known,The weariness, the fever, and the fret Here, where men sit and hear each other groan;Where palsy shakes a few, sad, last gray hairs, Where youth grows pale, and spectre-thin, and dies; Where but to think is to be full of sorrow And leaden-eyed despairs; Where beauty cannot keep her lustrous eyes, Or new love pine at them beyond tomorrow.Away! away! for I will fly to thee, Not charioted by Bacchus and his pards,But on the viewless wings of Poesy, Though the dull brain perplexes and retards:Already with thee! tender is the night, And haply the Queen-Moon is on her throne, Clustered around by all her starry fays; But here there is no light, Save what from heaven is with the breezes blown Through verdurous glooms and winding mossy ways.I cannot see what flowers are at my feet, Nor what soft incense hangs upon the boughs,But, in embalmed darkness, guess each sweet Wherewith the seasonable month endowsThe grass, the thicket, and the fruit-tree wild; White hawthorn, and the pastoral eglantine; Fast-fading violets covered up in leaves; And mid-May's eldest child, The coming musk-rose, full of dewy wine, The murmurous haunt of flies on summer eves.Darkling I listen; and for many a time I have been half in love with easeful Death,Called him soft names in many a mused rhyme, To take into the air my quiet breath;Now more than ever seems it rich to die, To cease upon the midnight with no pain, While thou art pouring forth thy soul abroad In such an ecstasy! Still wouldst thou sing, and I have ears in vain--- To thy high requiem become a sodThou wast not born for death, immortal Bird! No hungry generations tread thee down;The voice I hear this passing night was heard In ancient days by emperor and clown:Perhaps the self-same song that found a path Through the sad heart of Ruth, when, sick for home, She stood in tears amid the alien corn; The same that oft-times hath Charmed magic casements, opening on the foam Of perilous seas, in faery lands forlorn.Forlorn! the very word is like a bell To toll me back from thee to my sole self!Adieu! the fancy cannot cheat so well As she is famed to do, deceiving elf.Adieu! adieu! thy plaintive anthem fades Past the near meadows, over the still stream, Up the hill-side; and now 'tis buried deep In the next valley-glades: Was it a vision, or a waking dream?
Fled is that music:---do I wake or sleep?
****************************
Part of the magic of reading and studying his poem that day was that the gardens in which we sat were where he would have walked and stopped and sat down, while writing the poem and where he may have written it after hearing the nightingale's song on a walk around nearby Hampstead Heath. It was quite shocking to realise that he had died at the very young age of 25. The poem flirts with the idea of death as TB or 'consumption' carried away so many people of those times. 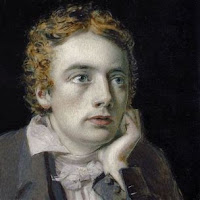 I have been half in love with easeful Death,
Called him soft names in many a mused rhyme.

Keats I'm sure, like all poets, wrestled with the English language to find the right words to express what he wanted to say.

Many years ago, I did write a poem about that struggle, the striving that we all have to communicate - although I'm not putting myself or my simple poem in the same league as Keats' genius.

Here's my poem, perhaps it does manage to convey the gap between the words we say and what we're trying to express....

Sometimes words gallop
from my mouth in a disordered rush
and people’s eyes glaze over
under the barrage.

Sometimes, when its warmth that I feel,
cold razor words fall from my lips
and the distance to bridge
becomes a glacial chasm.

Sometimes words are so futile and grey
for painting passions that could explode
in a rainbow of numberless colours
that I despair.

Sometimes a chord sounds
when I look in someone’s eyes
and a note of harmony hums between us.
These moments, though rare keep me in tune.

… so how do we convey grief or sadness or depression?  This is why poets so often use metaphor, because there's no other way to convey what we really want to say.  My poetry writing is generally easy to understand and accessible but sometimes metaphor(or simile) is the only way …

I’m walking on ice, thin, brittle,
sliding one foot forward,
then another, then another.

My legs tremble,
the ice crackles and squeaks.

I put out my balancing arms,
step one, two, three,

and look across,
holding steady.

But the other side
is hazy and blurred.

Maybe it's the job of a poet to find the words that you want to say but can't and speak them out for you?  Is that it dear reader?  I'll end this with Keats and the nightingale - as I began this musing. ..

Adieu! adieu! thy plaintive anthem fades Past the near meadows, over the still stream, Up the hill-side; and now 'tis buried deep In the next valley-glades: Was it a vision, or a waking dream?
Fled is that music:---do I wake or sleep?