I'm a total plonker when it comes to any kind of sport. Part One

A surveyor came to my home the other day and he was telling me about his obsession - parachuting.  He'd learnt it in the army many years before.  He was 74.  Which just goes to show ..... something or other. 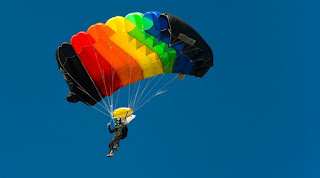 As he described jumping out of an aircraft 3-4 thousand feet up, I shuddered and went slightly green.  That's beyond all reason to me.  But, I told him some of the things I HAVE tried and how I felt about them afterwards ... on a scale of 1 - 10.  I didn't want to appear to be a total wimp  (but maybe I am).  I was totally useless at sport throughout my school days. But over the years, I've come to the conclusion that although I like adventure, I'm a person who operates best with both feet firmly on the ground.

I'm going to have to describe this to you in two parts  - its too long for one blog.

I tried it in Malta when I was 16 (a lo..o..o..ng time ago). The man in the speedboat had given me rudimentary instructions on how to stay afloat while having two heavy wooden skis attached to your feet. Then he jumped back in his boat and waved - I was fighting to stay afloat, to keep my head above the waves and my skis seemed to have a mind of their own, - they didn't seem to want to stay parallel. Suddenly the boat leapt forward and flew over the water. ..I was up on my feet for a split second. Then I arced up into the air, arms and head first. My arms felt like they'd been wrenched out of their sockets (they had).  Then I came down face forward with a crash.  He circled back and yanked me out of the water.  My arms and shoulders were rigid for days.
Scale 1:10  Verdict: Never again.

I remember my Dad telling me some time later about how he'd tried it - someone he knew had a speedboat moored at Swansea Yacht club.  They were all pretty tanked up when he'd decided to have a go. He said that as the boat leapt forward, his swimming shorts were yanked clean off and there was cheering from the jetty, 'a large appreciative audience', he said, as his naked bottom bobbed along the surface of Mumbles Bay. 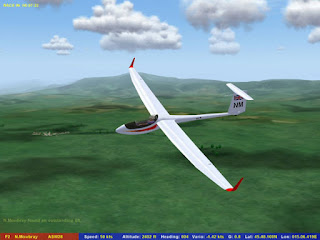 A Buddhist friend organised a group of us to go gliding at a small local airfield not too far from London.  How exciting I thought, what an adventure, how lovely to be slowly and silently swooping over the beautiful English countryside on a lovely summer's day.

This poem is about flying.  It's by John Gillespie Magee Jr. who was a fighter pilot in WWII, killed in 1941. My Dad was a WWII pilot and this was read at his funeral.  It's called

Oh! I have slipped the surly bonds of earth,
And danced the skies on laughter-silvered wings;
Sunward I've climbed, and joined the tumbling mirth
Of sun-split clouds, --and done a hundred things
You have not dreamed of --Wheeled and soared and swung
High in the sunlit silence. Hov'ring there
I've chased the shouting wind along, and flung
My eager craft through footless halls of air...
Up, up the long, delirious, burning blue
I've topped the wind-swept heights with easy grace
Where never lark or even eagle flew --
And, while with silent lifting mind I've trod
The high untrespassed sanctity of space,
Put out my hand, and touched the face of God.

Well my gliding experience didn't quite live up to that. ...

Have you ever wondered how gliders get up in the air?  No?  Me neither.  Never thought about it, except vaguely.  Well here's how it works.  The nose of your glider is attached to what looks like a giant elastic band. This is attached to a contraption on the ground a hundred metres away, a bit like a catapult with a switch.

There were about 8 of us that day and we took it in turns with 2 gliders and two instructors.  You sit in the front with a harness on and a small instrument panel is before you, but you're instructed not to touch anything.  You also have a sort of steering wheel.  The instructor sits behind you, in their own compartment and basically does everything.  Its a bit like dual control car driving.  He/she will let you have a go steering (they say) when you're up. The space you occupy is about the size of the space in a small canoe. I had no idea at this stage how this thing would get up into the sky (this was before Google).

I'm sitting waiting for something to happen when someone (who?) must have activated the catapult.  Suddenly we are shooting up towards the sky vertically (or so it seems). My stomach never caught up.  I now notice the brown paper puke bags beside me, but I'm too terrified to move to get one. I clench my teeth. We fly around a big hill several times.  Each time that we're not flying in a straight line, but curving round the hill, I think I'm going to be sick. I'm not, but come close. Lovely country views?  Don't remember.  All I remember is wanting it to be over and enduring it. 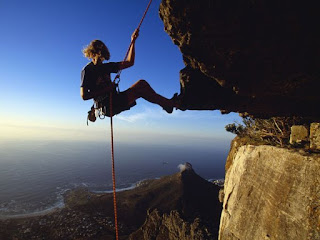 Me and then husband Dave, climbed Table Mountain in South Africa in 1976.  Our friend Nigel, who was an enthusiastic climber told us he'd take us up Table Mountain 'the easy way  ... it'll be a nice walk'.  He drove his jeep to the lower slopes.  It was going to take a couple of hours.  We'd come down in the cable car. Lovely, looking forward to it.  Spectacular views etc..etc..

I began to feel slightly worried when he started off-loading coils of ropes and carabineers and harnesses from the back of the jeep,  This was before trainers were invented (yes, really).  I was wearing light canvas plimsolls.  I wrote a whole chapter about this climb in my book -

'A Hippopotamus at the Table'.

We climbed up crevasses, sheer rock faces, overhangs.  I wanted to die, no I wanted to live, so I could go back to my 3 year old. So I mutely followed instructions, roped up to Nigel - Nigel and his scarecrow, dope smoking friend, both of whom seemed to know no fear whatever. Nigel who before each section/slope said things like, 'Oh this bit's fine, not difficult at all', and after each slope he'd say, 'That was an F1 slope (whatever that means) - lots of climbers in the mountain club wouldn't attempt that one.'
As we climbed my headache developed.  By the time we got to the top it was a full blown migraine.  Nigel kept up a cheerful commentary, reminding us to look at the view.  The painful pounding in my head and sheer terror, meant that I didn't give a shit about the view. (I went back many years later - it is truly spectacular.  I went up and down in the cable car that time).

I just wanted to get to the top and get the cable car down.  When we got there finally, Nigel's friend hop skip jumped across the flat rocky top to the other side, to check on the cable car.  He came bouncing back and told us the appalling news - the cable car was cancelled due to high winds. 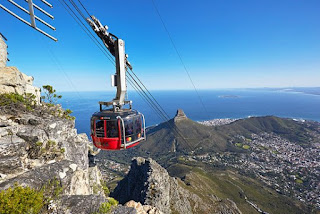 We would have to 'belay' (ie roped to each other) down again.  The weather had turned grey, windy and nasty, it was getting dark and we were dressed in light summer clothes. My head was crashing.  Somehow, hours later we made it back to the jeep.

My daughter had barely noticed my 6 hour absence - she was playing with her friend - although friend's mother had noticed.

We went home and I took to my bed for 3 days.

I'll tell you all about my experiences trying to scuba dive, hill walk in freezing weather, paraglide off a hill top and .... well next week OK!