Hatshepsut - I declare before the folk who shall be in the future ... 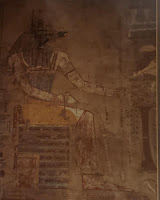 Hatshepsut was the daughter of an 18th Dynasty King called Thutmosis I. She married Thutmosis II her half brother who died after a 14 year rule. They had a daughter, Neferure. Thutmosis II had a son by a concubine who was a child at his death, so Hatshepsut, his stepmother, became regent. She reigned until her death in1428 BCE more than 20 years later. She took on full royal male titles.

After she died, her stepson who became Thutmosis III, had her name chiselled out of many monuments ...
The wonderful Hatshepsut Temple was built by her and her architect/consort Senenmut at Thebes.
The inscription always makes the hairs on the back of my neck stand up becase it's as if she's talking directly to us today ...
This is another of the keyboard exercises I used to set in HMP Holloway, to type up the inscription.
Amun is Amun-Re King of the gods. The king she refers to is herself.
The photo (above) is from a wall painting of Anubis, god of the underworld, from Hatshepsut's temple. I took it in the late 80's when I was employed by Hayes and Jarvis to travel by boat down the Nile and give lectures about Ancient Egyptian history to tourists annually.
The Obelisk Inscription 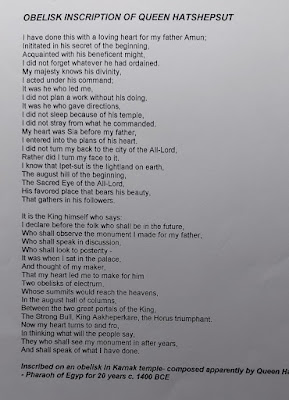