I've written 'before the pandemic'  is that how 2020 will be defined from now on - before the pandemic ... after the pandemic.  Except there is no 'after' yet.  There's 'after lockdown' but which lockdown? Seems like there's going to be a series of lockdowns for who knows how long. And the world has been kicked into the worst recession since post WW1.  Conversations (so nice to have face-to-face conversations at last), conversations start and finish amongst my group of friends and relatives with facts and opinions about the latest pandemic news. What's difficult is finding the parameters of opinions amongst that same group of friends - widely disparate views on shielding, staying in, mask-wearing, meeting up (where when and how, going into shops, using public transport, going to the cinema.)
Two weeks ago, our local Arts cinema opened and myself and a friend went to see the widely acclaimed movie - Summerland.    Including us, there were 4 other people in the cinema which has plenty of social distancing measures in place.  Where are you people?  The local community cinema will not survive unless you come?  Where a mask, gel up but come.
Summerland was worth seeing although a bit contrived and sentimental at times I felt.  Bring tissues.
The point is the fear and paranoia engendered by the government seem to have gone deep and settled in the minds of some, intelligent rational people.  Now they don't want to let go of it. 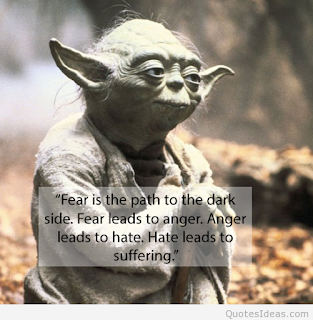 My response to fear for a long time is - don't ever let fear get in the way of what you want to do.  I had a Zimbabwean boyfriend once who was fearlessly outspoken in both Zimbabwe and South Africa about the terrible things going on in the reign of Robert Mugabe.  Other people we knew were being kidnapped, beaten up, tortured and murdered by the regime. He was not reckless but he consistently spoke up and then he got out.  He spoke out in rallies and meetings against the regime and continued to do so when he got to first America and then the UK.  He had no truck with fear.
I have often been told not to go here or there, not to do this or that because the consequences would be .... often unspecified, but violence and death were usually implied.  I have then gone on to (cautiously) do the thing I was warned about and had no problem.  People looked after me, guided me, were kind to me.
In 2003, I was a human rights activist with focus on my birthplace - Zimbabwe. I flew to Johannesburg, stayed at a backpack place.  Lots of long term residents there - mainly white S Africans (the poor whites), and Zimbabweans.  I told them I was getting the bus to Harare, in Zimbabwe.  I wanted to get in anonymously, by the back door - I was a very active MDC (opposition party) member who'd been in the news.  It was a time when white farmers were getting murdered and Mugabe was fomenting anti-white hatred wherever he could.  They ALL loudly and vociferously warned me not to go. I would be mad.  Dire things would happen to me.
I went anyway.  A 14-hour bus journey ending at a big bus garage in Harare - one of the main torture centres was sited at the side of the open-air bus garage (as I'd been told by a friend who had been tortured there). The noise of all the buses and people and bustle concealed the screams apparently. 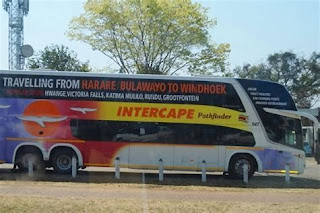 I arrived and was picked up by a man from the local backpack place.  From there, after a few days in Harare, I got the overnight train to Bulawayo.  I travelled everywhere alone.  People picked me up at various stop-overs and drove me to various places, we visited MDC  headquarters, watched by the secret police,  then off I'd go again.  A young man attempted to snatch my bag in Bulawayo, while I was walking with an older grandmother,  her daughter and baby. The grandmother and I fought him off. He ran away empty-handed.
From there it was on to Vic Falls - empty of tourists (like now I imagine - then because of Mugabe, now because of Covid). People were starving at that time, due to Mugabe's economic policies, so desperation was all around - as it is again today.  You take sensible precautions.
What I found everywhere was that people (mainly women) took care of me, made sure I was walking in a safe place, told me when to get a taxi, etc. Each day, I looked at what I wanted to do, where I wanted to go, took sensible common-sense precautions and off I went.  Fear was not going to stop me.
In the 80s, I was at my sister's wedding.  I remember my uncle- a retired senior Armed Forces officer, telling my brother that he had filled their garage in Cornwall with cans of corned beef 'against the revolution' ...  ie. against CND marching lefties like me who were clearly fomenting this revolution. 🤣
He later succumbed to Alzheimer's...a long deterioration sadly. The right fears the left.  The left fears the right.  The result is more fear, more conflict.
Fear is in your head - not outside it. If you dwell on it, it expands to fit the universe you occupy.  The post lockdown world is full of extremes - some dismiss the threat altogether as some giant conspiracy theory and ignore precautions.  Some go into permanent lockdown and refuse to come out.  There are many shades of grey in between. 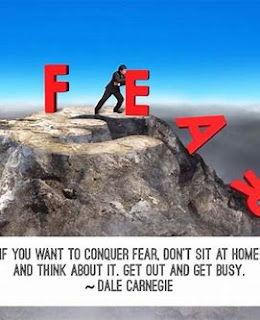 I don't like being locked up, no ...  I REALLY don't like it.  I'm not going to go the whole way.  Even though, as they say, I have 'underlying health conditions'.  But I do take common-sense precautions.  I've been wearing a mask out since early March.  I frequently gel my hands when I'm out - after getting on a bus, or going in a shop.  And I keep my distance from all not observing the social distancing rules.
We can't stop doing everything.  Every day I go out for a walk, maybe in the park or somewhere.  Now I go to libraries to write again or cafes.  The British Library is taking people by appointment only, with a lot of restrictions - but I'm going regularly, while I still can ... until the next lockdown. 😕 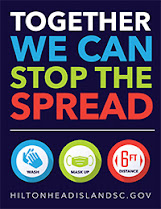 Mental health is important too.  If you let fear take hold it's all-consuming and will fill your life, alter your grip on reality. What I'm saying is get fresh air. walk everywhere,  take sensible precautions.  Don't get paranoid, don't  EVER let fear rule your life.  This virus and the various responses to it have created a huge climate of fear - if you let it take hold. 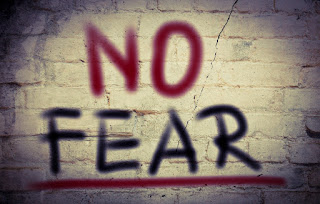 Watch your mind - you can allow an unhealthy amount of fear to build up and up to fill the universe - if you let it. ..