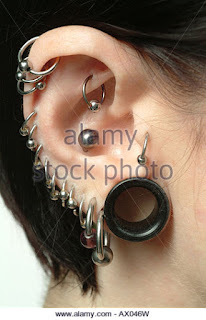 If it wasn't for all the piercings on his face, you'd never have noticed Al.  Even with all the piercings, most people in our little cul-de-sac rarely saw him, or if they did, knew nothing about him or noticed him scurrying by with his head down.

But you see I'm Welsh, we Welsh are nosey-parkers, we want to know everyone's business within 5 minutes of meeting you. For English people, it'll take about 5 years.

I saw him a few times hurrying past, in the first few months of moving in here - I saw him with his head down, not looking left or right, avoiding eye contact.  I saw him going to the white door next to mine, getting in to the alcove sharpish, key ready, getting the door open, whisking inside and closing the door quick, too quick for anyone to speak to him.

Soon I'd worked out his pattern and decided to put a spanner in the works of his avoiding, as he turned in to the path to his front door, I shouted 'Hullo.  We're neighbours aren't we?' Or some such scintillating rubbish.  You've got to start somewhere, haven't you?

'Hi,' he said briefly, muffled through the rose bush.
'Which flat you in?' I said.
'Up the top.' he said, I could hear him turning the key in the lock and softly closing the door.
'Ha!' I thought, got one thing out of him anyway.

Stubborn and determined, that's me, don't give up easily.
Next time I saw him, it was the middle of winter, freezing and he was hovering in the porch, his porch.  Not opening the door. I poked my head round -

'What happened?'  I asked.
'I left my keys somewhere.' he said.  'Someone's bringing me a spare set.'
'Well don't stand out there in the cold,' I said, 'come in and warm up.  I'll make you a cup of tea.'
We Welsh are renowned for our hospitality.

I tried a bit harder but he was adamant.  I brought him out a cup of tea.  If not my Irish grandmother would have turned in her grave (she married a Welshman in case you're wondering).  The Welsh and the Irish have similar rules about hospitality.  You must ALWAYS give any guest/visitor/worker a hot drink AND something to eat.  If not the sky will fall in or something.  Not like the English.  They don't have the same hospitality rules.  They'll leave you out in the snow rather than break the rules about no contact with strangers.

Al was definitely of that ilk.  He did not speak to strangers.  All contact of a personal nature was to be avoided like the plague.  Any exchange of friendly conversation between neighbours even was also to be avoided. So he stayed outside and half an hour later when I looked, my cup was on my window sill and he had vanished.

I haven't really given you much idea about what he looked like have I? 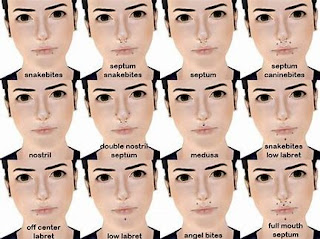 Apart from the piercings.  I suppose he was small and light, with a shaven head and then there was the piercings.  More piercings than you'd have thought possible in one small face - nostrils, eyebrows, lips and ears of course, not just one but a row of rings on each facial part. I remember only that he wore dark clothes, a hooded jacket, combat type.   Sounds a bit thuggish doesn't it?  But he wasn't.  Not at all.  Completely inoffensive, quietly spoken, intelligent - all this I discovered when I eventually got him talking.  Very gentle. 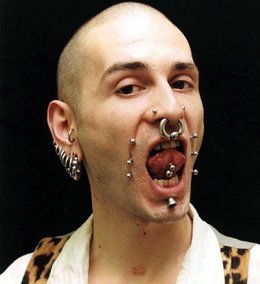 After that occasionally he would stop and talk to me, if I had the time to instigate a chat that was. I studied the piercings each time of course. He worked in some civil service job I think. I wondered what his work colleagues thought of his pierced face.

Mostly, he would continue to hurry past, head down, not looking at anyone.  We'd talk about the weather or not much, nothing in particular.  If I got him talking he was always pleasant, quite chatty in a quiet way. Sometimes I saw him with a Gothic girlfriend - black hair piled high, lots of black mascara, lots of facial piercings … 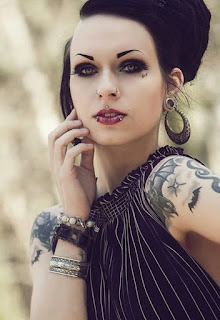 And then ....  a year ago I was in bed and my bedroom faces the street and I could hear an engine running for ages, right outside - so I went out in my dressing gown. We've had problems with drug dealers in our cul-de-sac.  I ent to investigate. It was an ambulance, a paramedic talking to Al, the back doors were open, they were sitting on the step.  Apparently Al had had a funny turn, something about his heart.  I chatted for a bit.  The paramedic said she was waiting for 'another ambulance', one that would take Al to a local hospital with a specialist unit.  Al seemed to be fine, he was chatting, upright, did not appear to be in pain … the medic was insisting it needed further investigation and an ECG.  Al seemed embarrassed by the fuss.

Again I went in and made cups of tea and brought them out.  Al kept thanking me and saying he was sure it was all ok. I sat up chatting to them for about 20 mins and then the other ambulance turned up. The following evening, I saw Al scurrying past again and he told me he was fine and they'd not found what it was, so sent him home. 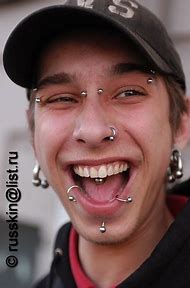 On Monday night  - I was out and came home late - got a call from a neighbour - lots of police were seen going in to house next door to me.  Someone had rung her bell earlier asking for Al. She didn't know him. …

Next day, we discovered he'd been found dead in his flat.  I'd only seen him a few days ago - whisking past, head down - 'Hey Al' I'd said.  I was in a hurry too that evening, not knowing it was the last time I'd see him. We'd not stopped to chat.

I suppose I wrote this because I wanted to mark his life in some way.  It's quite surprising that even though you know little about the events of a person's life, how much information about them you have gathered.

A gentle man with the extra-ordinary facial piercings, but very private and shy.