And death shall have no dominion

The poem above was written by the great Welsh poet Dylan Thomas in 1933.  It was one of the first poems he ever had published. Years later he wrote Do not Go Gentle into that Good Night, about his father, written a few years before his father's death in 1952. 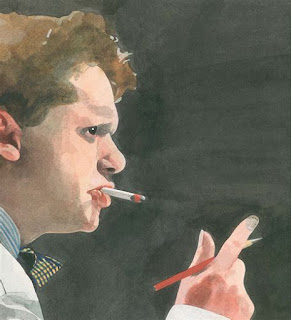 I grew up on a diet of Dylan Thomas, not least because the Uplands, Swansea, where he'd lived as a child, was where I too grew up. My father had the Richard Burton recordings of his famous play written for radio - Under Milk Wood (on long playing records). He read to us from some of Dylan's stories, for example the story of his grandfather, who disappeared one day from the town.  Friends went looking for him in a 'charabanc' (horse and cart) and he was found walking along the road to the next town - Llansteffan (near Laugharne), in his best suit:

'Where are you going, Mr Thomas?'
'I'm going to Llansteffan to be buried.'
'But you're not dead yet, Mr Thomas.'

The poetry of Dylan Thomas is about sound, alliteration and, somehow meaning comes from the original, unique, brilliant way that Dylan put words together.
For example:

'Faith in their hands shall snap in two,
And the unicorn evils run them through
Split all ends up, they shan't crack
And death shall have no dominion.'

These poems were favourites of my children's father and close friend, - Dave, who died recently in Indonesia where he lived with his wife and son.. He too grew up in Swansea. The funniest man I ever met. Did he or didn't he 'go gently into that good night', as he fell into a coma from which he didn't regain consciousness? 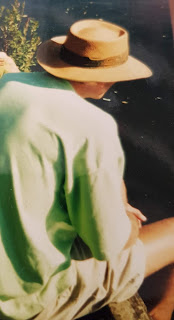 Death is inescapable for all of us.  He's gone and so death truly did have dominion, didn't it?  And yet ....

Dylan's poem is not so much a statement, but a bitter, angry rallying cry to drag meaning and continuity from the fact of death.. A call to arms ...

I'm reflecting therefore on death and throughout the whole difficult process of Dave's short illness and end, we've had to take part in an experience of death in the framework of a very different culture. The Moslem burial was done and dusted less than 10 hours after the doctor's pronouncement - so fast, we Westerners had little time to assimilate the shock of it all.

How does it all fit in to our spiritual beliefs?  Moslem's and Christians see death as a stepping stone to being with Allah or God. Moslem's have prayers daily for the first 7 days (I've discovered) and then regular markers where prayers are said for 40 days, and other prayers for up to a year after. Different branches of Christianity have a variety of practices - a short service and prayers usually.

Buddhists see the dead person as entering 'the Bardo', a spiritual half-way house where the ever changing and developing soul stays re-orienting itself, until it's time for the next rebirth.  In strong Buddhist cultures monks will chant for the departed for 49 days and nights. Om mani padme hum. 'Mantras are words of power that focus very strong spiritual forces'. Buddhist funerals are in white. Chanting has a powerful effect on the soul of the departed, so the Tibetan masters say.

If you have a spiritual belief, and many people tell me
'I believe in some kind of god but I don't belong to any church or religion,' how do you deal with the puzzle of death?

Someone recently diagnosed with cancer told me
'I'm not afraid of death, but I don't want to go yet.'
Do you face death with equanimity?  Do you have a written will?  My father died without a will and yet he'd had cancer for 4 years.  The ultimate denial - it meant my mother was unable to access his pension and assets for nine months. How many of us avoid looking at the fact of our own death, avoid thinking of the subject at all?

And when someone we know has died, what comfort do we offer the bereaved?  In English culture, some are afraid to even phone up - they don't want to intrude on someone's grief, as if grief itself is private.  In other cultures, Caribbean, African, Moslem, the opposite is true - you go round to be with the bereaved person to offer support, not next week but now, today, even if you're not close family.  It's expected.  I like that. But then I'm not English, I'm Welsh.

'I think Dave was here with us'.

Well yes he was. He was/is close to your heart and mine and my daughters and if we think of him, he will gravitate to us. So I chant and light candles and we all send him positive loving thoughts, to aid his journey ... 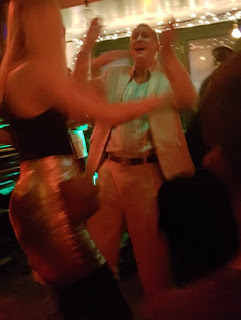