Poetry and Music Palooza for the Finchley LitFest 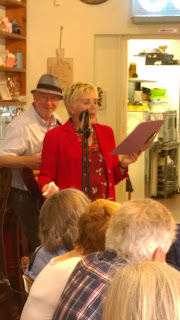 This was a great evening of interesting performances - if you missed it I'll post the You tube link in a moment. First I want to give you the biographies  of the performers - all fantastic! All professionals with great track records of performing :

Hilaire grew up in Melbourne but moved to London half a lifetime ago. Triptych Poets: Issue One (Blemish Books, Australia, 2010) features a selection of her poems, and her novel Hearts on Ice was published by Serpent's Tail in 2000. She is poet-in-residence at Thrive Battersea Herb Garden for this year’s Open Garden Squares weekend. Quirky, unique and unusual poetry style. http://hilaireinlondon.wordpress.com

Arup Chowdhury is a singer/ musician who plays classical-based Bengali folk songs, some combined with English folk tunes. He may be joined by a female Bengali singer. He was born and raised in Bangladesh, played Harmonium when young but also learned guitar, keyboards, and harmonica. He has two master’s degrees from London Universities.  Beautiful voice and who knew Bangladeshi folk songs could be so uplifting!

Steve Turner was born and raised in the Midlands but has lived in London all his adult life. His poetry collections include Nice And Nasty and The King Of Twist. He has written five books of poems for children, one of which is the bestselling The Day I Fell Down The Toilet. He is the author of biographies of Johnny Cash, Jack Kerouac, Van Morrison and Marvin Gaye among others. His next book, to be published later this year in America by HarperCollins, is Beatles ’66. His poetry is provocative and thought provoking yet always accessible.

Anna Meryt has had numerous single poems published in anthologies and magazines. She’s part of Highgate Poets (www.highgatepoets.com). In 2011 she won first prize in the Lupus International poetry competition for her poem ‘Bulawayo’ – about her birth place. Two poetry collections – Heartbroke (2013) and Dolly Mix (2014) and a memoir (set in South Africa in the 1970s) titled A Hippopotamus at The Table. Her blog is at www.ameryt.com

Greg Mayston sings and plays Folk, Blues and Americana on fine vintage and modern guitars of steel and wood, and is branching out into the five-string banjo.  He regularly performs with his trio in and around Reading and joins us for a solo performance. He’s a truly virtuoso guitar player and has performed at the Festival previously. Greg's playing and singing goes from strength to strength, I could listen to him for hours.