I was in India in January and while there, I wrote a series of emails to family and friends at home about the experian. It began to almost seem like a book... maybe it will be one day... here is the first letter: 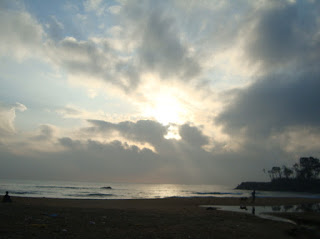 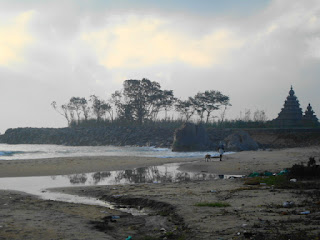 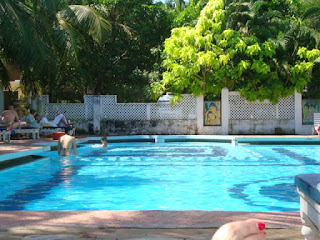 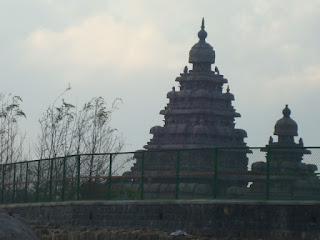 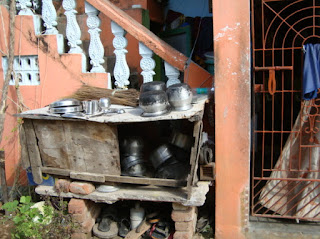 Day 3
We’re picked up and drove in a mini bus for 4 hours to reach Ramana Maharsha Ashram. Lush green scenery, rice paddy fields flashed past. Going through towns and villages, everyone blowing their horns, skid round wandering sacred cows, yellow tuk-tuks (small 3-wheel passenger vehicle), huge lorries with garlands of flowers draped inside the cabin and round the front grille and pictures of exotic deites, Ganesh (the elephant god) Shiva and Lakshmi and Krishna, brightly coloured paintings decorate the cabs.
We pass a huge group walking in single file along the road, of girls and women in deep red saris. I take lots of photos for Facebook. 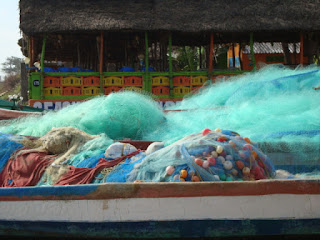 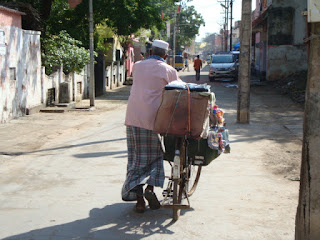 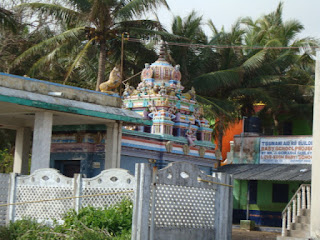 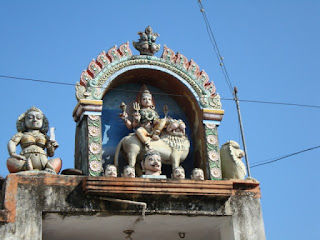 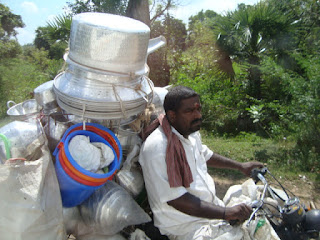 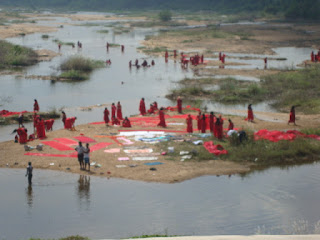 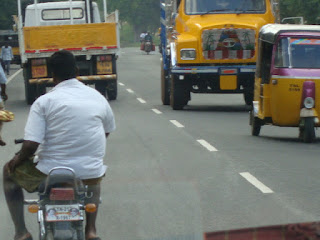 After arriving we have to go and register at the Ashram to pick up the keys to the apartments. I am wearing an expensive pair of sport sandals that are extremely comfortable and light and have soles made from car tyres. They look nothing special, but my feet know better. I had found them in Turkey and got them for a bargain price. We are told to take off our shoes in the car park – there is either the shoe man where we can leave them or a place by the steps – ie inside the gates of the ashram, near to the sacred marble walkway, There are many shoes there. I decide on this option as other wise I must walk across the rough sand and stone covered car park in my delicate feet.
We go in the office. There is one young man dark, Tamil, in charge of accommodation...apparently. Jane explains why we are here. Warren is also there to back her up. The ashram guy is polite, Jane is polite back. He keeps answering his mobile phone and talking. Forms are produced – we must all fill them in, show our passports. He explains where the apartments are, Jane and Warren both know the location – it is a block about ¼ of a mile from the ashram, we leave to tell the others.
Jane and Warren walk on ahead, as I can't find my shoes. I know the exact spot where I left them. Has someone moved them? I circle round and round and round, they are nowhere. They are gone. They have been stolen. I go and get Jane, she is tired and dismissive, Oh dear what a shame. I go back to the minicab looking tragic, no one cares really, they make noises. Really all they want is for me to shut up so they can go find their accommodation. I want to cry.... loudly, I want everyone to acknowledge my loss, my feet are in deep mourning, but only I care. I try to report it to the young man in the ashram office – he is at tea and won't be back for 20 mins. I get back in the minibus. Everyone heaves a sigh of relief and we go find our accommodation.
I go in my room, to be shared with Teresa – the shaven headed one. It’s a reasonable size room with 2 beds and an ensuite – inside which there’s a toilet, tap, bucket and scoop for showering. Ah this reminds me of Indonesia – all bathrooms have these there. There’s no toilet paper but Teresa has remembered Jane’s email warnings and brought some.
I hate everyone and blame everyone and most of all I hate the fucking sacred ashram – I thought Maharshi was supposed to be 'everywhere' in his dead state according to Jane...’inside everyone at the ashram'. 'Oh yeh – well he let in the thieving bastard who stole my shoes. No one cares ...'. I feel my loss has been unacknowledged by all. My favourite and only sandals. When Teresa comes in I pour it all out on her and no I don't want to go to evening meditation with everyone. She says she'll come and get me at supper time. I sniff.
She doesn't come and I fall asleep on the rock hard bed. She comes in later and is all apologetic when I remind her she was going to come and get me. She says she’s sorry, she doesn’t remember saying that, they’ve already eaten. I stomp off to Osho's cafe round the corner and eat omelette and toast and start to feel better. I go back and chat to Teresa for an hour then we fall asleep. We must be up for morning meditation at 7 am.
We have a pleasant enough meditation, starting with walking meditation, walking round some guys next to a statue of Ramana Maharshi. I later find out they are Hindu Brahmins – high caste and that annoys me – why should high caste people be used at the ashram and singled out for special functions at the ashram. They are dressed in kind of loin cloths and have red spots on their foreheads and white streaks on their faces. One of them is a peculiar fat shape, like he has dropsy. We later do meditation in a smaller room – Jane takes us there.
When I leave the ashram I tell the others I'm going to report the theft of my shoes in the office. I find the young guy who had taken our passports the day before. I start to tell him, in a very polite tone of voice and he immediately becomes attacking and defensive – it's my fault f they are stolen, I should have put them with the shoe man etc etc. I try to get a word in to say that maybe they could put up a sign saying it’s dangerous to leave shoes there, warning people. But he won't let me finish a sentence or listen to me... he says I don't want to hear about it, tell someone else, he becomes nasty. I stop but end by saying 'where's the loving kindness towards your guests, as taught by RM?' He walks off.

Later we go for coffee followed by 'darshan' with a Mother Mia type of woman. We go at 10 a.m and sit in a room with this woman in silence. More about that later.

The following afternoon in true mad dogs and English (wo)men style I drag 3 women down to the shops by tuk tuk and buy a new pair of sandals. They are not the same. They can never be as good. But they cost c.4 quid, so I buy them and a pair of flip flops in case.. They're OK. The shops are in a busy market area near the R M ashram. This has four huge gateways kind of pyramidical but very high.. We then go for coffee at The Best Coffee shop in Tiruvani (the world etc)

Later four of us, Jenny, Josie, Me and Teresa – the Groovy group one of them's son calls us when he texts, meet up in someone’s room and sit around drinking tea and talking about important subjects like shopping and the hygiene(?) here. They all had been to lunch with Jane at this place and these banana leaves were put directly on the table and then when someone fussed about hygiene the guy came over and wiped them with a tap watered cloth (No No No) and his hand, ready to put the rice on. They had not said anything for fear of upsetting Jane. I told them if they all get dysentry it’s on their own heads and I am not helping them...

I'm writing this in Osho's cafe round the corner – Oh! I moved from the ashram accommodation – the beds were impossibly hard, Josie and Julia have rooms in a nearby hotel – Josie had a spare bed in her room – which she offered to me. I took it and went for a look – IT HAS (OH JOY) AIR CON.AND A SOFT THICK MATTRESS. I'll give her some money. Meanwhile here I am in the cafe, in a pool of sweat, being eaten alive by mosquitos, in spite of insecticides, anti hystamin, lavender and geranium... they are descending on me with feeding frenzy. That's it - I’m going to run back to the hotel and the air con and anti mozzy plug ins and have a snooze and maybe wake up in time for evening meditation. Perhaps?
Posted by Anna Meryt - About Me